The Wednesday night group and the Bums have been getting out to Big River in RI a bunch lately, but I just haven't had a clear schedule to make it happen.  That all changed today.  After rave reviews of endless miles of fast, flowy singletrack, my anticipation for a killer ride was palpable.

Dave Violette and I drove down together.  We pulled into the lot on Hopkins Hill Road in W Greenwich, RI, at 9:30 am.  There were 11 riders in our group all together - me and Dave, Bryan Quach, Ron Erickson, Chris LeClair, Brandon O'Neal, Alby King, Ben Stone, Jess Bly, Dan Russell and Marc Dupuis.

A few of the guys we were with knew their way around a bit.  We were trying to rely on some GPS routes from previous rides as well.  In the end, we still got mixed up pretty well in the beginning anyhow.  I think it was the too many cooks in the kitchen syndrome.  It made for plenty of cart road and several turns arounds, but I guess it gave us some extra miles as well.  We ultimately worked it out though and got on track.  I can't recall everything we rode as I was just following the tire in front of me, but there were some super cool techy trails with some decent climbs interspersed with the smooth, flowy singletrack that was promised.


A couple of the highlights of the first section of our ride include Quach riding off the side of a bridge crossing a stream and all of us blasting down a trail called the Ravine, which wasn't too long, but what it lacked in distance, it made up for with awesomeness.  It swooped back and forth up and down the sides of a deep gully several times.  As fun as a roller coaster.

My favorite thing though was probably a teeter-totter we happened across purpose built for mountain biking.  Great sign next to it - "You have to go faster than you think."  A bunch of had a go at it.


Big Ben fearlessly hits it first
And then Jess!
This is Dan's second go.
First crash was better, but not a family show.
And Daring Dave!
My first shot.  Ugh.
And success!
We got a little misplaced on the way back to the lot and did some pretty serious climbing.  I didn't think the biggest little state in the union had that many hills.
We made it back to the lot for a snack break at about 1 pm and with just over 17 miles under our belts.  I had a peanut butter and jelly sandwich that was akin to a slice of cheese pizza after a night of drinking.  Best peanut butter and jelly sandwich ever.  EVER.
After refueling and losing Ben (who was getting ready for 80 - 90 miles on the road tomorrow), we headed back in.
We got through a great initial descent (leaving the inevitability of a long schlog of a climb out).  There were countless rocks and logs to launch off.  We hit the bottom and after crossing a stream had a brutal climb out of the ravine.  After that there was some great, flowy mountain bike specific stuff using all the natural features the terrain had to offer. 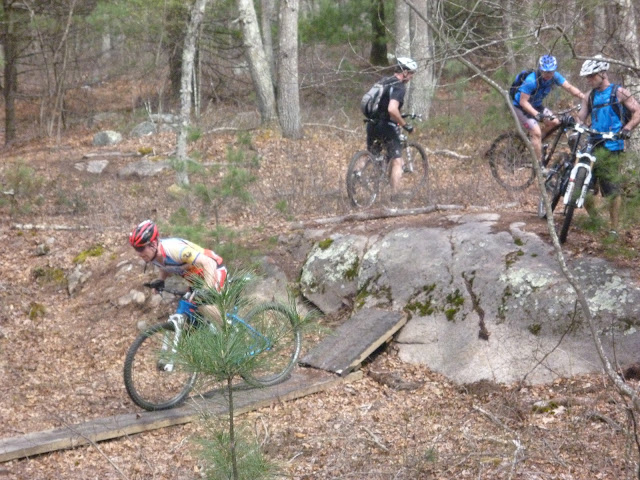 At a split in the trail we were faced with two options - the first a tough climb to a vista and the other a super technical trail called the Azorian Driveway.  We decided to do both, first climbing the hill and then coming back for the Driveway.  After climbing what I think they called the Elephant Trail, we arrived at the vista.  The guy who owns this land is a mountain biker and set up a couple of Adirondack chairs and a mailbox.  Here's the mailbox.
After we took in the view, we descended for the technical Azorian Driveway.
After finishing up the Azorian Driveway, we hit a couple of other trails.  One aptly named I See Dead People, which is what much of our group was starting to look like.  We made the decision to head back out and, after that climb we knew was ahead, made it back to the parking lot to grill up some sausages and have a beer, courtesy of Jess.  Thanks Jess! 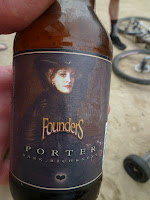 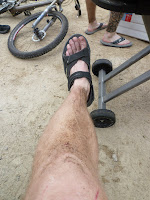 All told, I had 22.93 on my bike computer averaging 8.4.  A couple other guys had 24 and 25 miles on their computers and GPS units.   All in all a solid day riding.  I'll definitely hit Big River again.  And next time I'm holding those guys to endless miles of fast, flowy singletrack!
Posted by Pedal Pushing Patons at 9:16 PM